Today we’re going to look at Ninja Coffee Bar vs. Keurig in a comparison of coffee makers that are both capable of serving you a single cup at a time. Both brands make coffee conveniently accessible for the coffee drinker. Living alone? You can make one cup quickly with no mess involved. Need a three o’clock pick me up? A single-cup maker like Ninja or Keurig could be perfect for your small office.

The major differences between these two brands are the use of long-lasting pods or capsules known as K-Cups in the Keurig, vs. conventional filter baskets in the Ninja—and the Ninja’s greater versatility.

We’ll dive into these differences and some of the less obvious ones.

About Ninja and Keurig

The Ninja Coffee Bar brand is one of a few house-care brands operating under the larger SharkNinja brand. Founded by Mark Rosenzweig in 1998, the company has quickly become a leader in the home appliance market. They make everything from blenders, to vacuums, to coffee makers, to pressure cookers. The company is headquartered in Needham, Mass. and its products are found in stores all over the world. While SharkNinja is responsible for many household appliances, the Ninja house-care brand specifically focuses on kitchen appliances like blenders, pressure cookers, and tea and coffee makers.

The Keurig brand makes only its beverage brewing system and beverage pods. The original company, Keurig, Inc., was founded in Massachusetts by John Sylvan and Peter Dragone in 1992. Sylvan and Dragone used to make the pods by hand in the early days, but quickly brought in a manufacturing consultant to automate the pod-making process. Keurig has had many different investors and shareholders over the past two decades. Its original owners are no longer with the company. Today, the brand is owned by Keurig Dr. Pepper, one of America’s largest beverage companies. 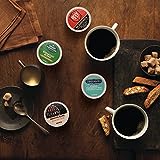 Keurig has received numerous awards in recent years, including Single Serve Coffee Maker Brand of the Year from 2012-2015. The brand boasts of having over 400 drink varieties across 60 different brands of beverages. However, Keurig has also faced scrutiny over the negative environmental impact of its K-Cup pods. While they are recyclable by some facilities, the cups are small and often fall through sorting grates. The company has made efforts to mitigate the waste impact through special recycling programs in Canada and the U.S. involving collection and burning of K-Cups at specific waste facilities.

The key difference between the machines

It’s pod vs. no-pod. Ninja Coffee Bar is podless. Its models come with a permanent mesh filter that you can use with the coffee of your choice. Alternatively, you can use any disposable cone filter. If you use it as a single-serve coffee maker, the Ninja should save you money. In that sense, pod vs. no pod really does matter.

Keurig has released the reusable “My K-Cup” for use with any coffee as well. It’s like a little pod that you can fill with your own coffee grounds. Still, most people use Keurig’s gourmet coffee pods with their makers simply for their convenience. 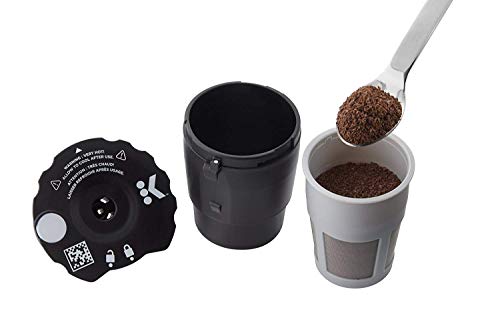 Let’s compare two of the most popular models from these brands. We’re looking at the Ninja Coffee Bar CF097 and the Keurig K575.

Ninja and Keurig machines use two very different systems for brewing coffee in their makers. Ninja lets the user choose from six different brew sizes, and specify the concentration. Then the machine combines the grounds with the appropriate amount of water. They call their system the Auto-IQ One Touch Intelligence system.

Keurig’s system scans a barcode on top of the coffee pod to ensure the pod is Keurig-licensed and not from another manufacturer. The barcode also signals to the machine to limit the selection of brew sizes depending on which pod is in the assembly. This system prevents users from using “bootleg” pods produced by competitors, and also serves a quality control function.

The Ninja maker provides far more choices for the coffee drinker. In addition to many different sizes, it can make milk drinks like cappuccinos and lattes. The consumer who likes a little variety might prefer this machine to the more narrowly focused Keurig. But for coffee drinkers who aren’t too fussy, the Keurig may be preferable. Its removable components are easier to clean, and the water reservoir requires refilling less often. Although the Keurig machine can’t make cappuccinos and lattes, it can still make a wide variety of drinks simply because there are so many different types of pods to choose from, with many different blends and flavors.

Both machines allow the consumer to quickly grab a cup of joe, but the Keurig K575 is a little bit faster than the Ninja Coffee Bar CF097. It can make a cup in just three to five minutes. The Ninja maker may take up to eight minutes, depending on the settings chosen by the user. Thus, the Keurig K575 coffee maker is a smart choice for someone one the go who doesn’t mind their coffee plain and simple. If you’re a busy person who likes to get fancy with coffee, don’t worry—the Ninja Coffee Bar’s brew time is still fast compared with many others on the market. And it comes with a thermal carafe, so you can have a few cups handy and don’t have to run it again when you need a refill.

The Ninja’s carafe holds a whopping 38 ounces (just over seven standard coffee cups) of coffee. The Keurig K575 doesn’t come with a carafe, but Keurig does manufacture a K-Carafe which holds 30 ounces, or six standard cups. The K575 is compatible with K-Carafe pods, which brew about four times as much coffee as a standard single-serve pod.

One notable advantage of the Keurig machine is that components which must be cleaned occasionally are very easy to remove, making for quick, efficient cleaning. On the Ninja, not even the built in milk frother is removable. The machine can certainly be cleaned, but it won’t be as easy as cleaning a Keurig. You’ll have to take the cloth to it, rather than the other way around.

Ninja’s coffee maker will brew at different concentrations according to your taste preference and whether hot coffee or iced. All Ninja models also include a frother, and the CF097 is no exception.

Recapping the differences between Ninja Coffee Bar and Keurig

The most important difference between Ninja and Keurig is the pod compatibility. If you don’t want to use a pod, Keurig is probably not for you. If you want exotic coffee drinks (cappuccinos, lattes, mochas), Keurig is definitely not for you.

When looking at the Ninja Coffee Bar vs. the Keurig, it becomes apparent that these two machines are aimed at slightly different segments of the market. The Keurig K575 is for those who value simplicity and convenience over all else, while the Ninja Coffee Bar CF097 is for those who like to mix things up a bit. The built-in frother, three different strength settings, and special settings for ice beverages are a boon for coffee drinkers who like to experiment.

Once you know what you’re after, choosing between Ninja Coffee Bar and Keurig should be relatively straightforward.

1 thought on “Ninja Coffee Bar vs. Keurig: A comparison of two popular models”