Almost everyone starts out with drip coffee. At some point, anyone who loves coffee begins to wonder what lies beyond the drip machine. You may not be ready for finely tuned espresso and intricate latte art, but if you want to step up a level in your coffee adventure, then a moka pot or a French press would be a good way to do it.

These devices are not at all alike, and each one requires a bit more effort than your average Mr. Coffee machine to get your coffee right—but you’ll be gaining experience and drinking a lot of great coffee along the way, making it all worthwhile.

With that in mind, let’s compare moka pot vs. French press, see what each device can brew up, and determine which one is right for you.

What is Moka Pot Coffee?

A moka pot is a two-chambered coffee brewing device in which water is heated in a lower chamber and rises as steam through a bed of coffee grounds, before spilling into an upper chamber as coffee. The slightly pressurized brewing method produces a dense, strong coffee somewhere between drip coffee and espresso.

Moka pot origins can be traced back to 1930s Italy, when Italian homes needed a way to brew coffee quickly and efficiently. The humble moka pot allowed Italian families to do just that, giving them a hassle-free brew using a gas or electric stove.

If you’re looking for the best moka pot coffee maker, the brand that pioneered the moka way back in the 30s—Bialetti—remains an industry standard to this day. 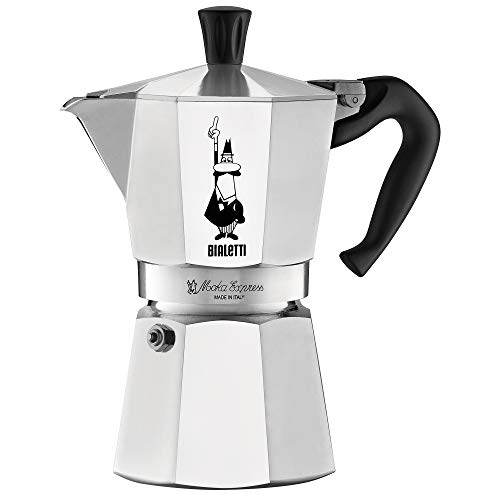 There is something naturally intuitive about the way a moka pot is shaped. Millennia of using pots in various forms have made us so used to that style that we immediately associate it with coffee and tea goodness. That a moka pot—its metallic exterior notwithstanding—looks a lot like a traditional pot of brew is definitely an aesthetic point in its favor.

That said, these coffee pots are even more well known for what they can brew. Moka pot coffee doesn’t take a lot of skill to make, which is a plus if you don’t have a lot of coffee-making skill to begin with. When it comes to degree of difficulty, a moka pot is on par with an AeroPress.

Moka pots, also known as stovetop espresso makers, can produce something much stronger than your standard drip coffee. It’s not quite espresso, but for coffee novices who might be a bit intimidated by a serious espresso machine, moka pots are relatively low tech and highly accessible.

What’s more, the coffee they produce isn’t half bad. If you’re the kind of kid who liked to color outside the lines, a moka pot can be a way of introducing some color (and bold coffee goodness) into your life.

Using a moka pot is simple. There are two chambers in the pot: an upper chamber and a lower chamber, separated by a basket for the grounds. They all screw together.

You fill the lower chamber with water until the water level is almost as high as the pressure release valve on the side.

Grind your beans quite fine—not espresso fine, but more fine than drip coffee—and fill them to the top of the basket. Don’t pack them, just level them.

Insert the grounds basket so it rests snugly in the top of the water chamber, then screw the empty top chamber into place. Place the whole device over medium heat and wait.

Most moka pots have a hinged lid that you can lift to see how your brew is progressing. At some point, thick coffee will dribble out of the chimney in the upper chamber and slowly begin to fill it.

As the chamber fills, keep an eye on it. When the chimney begins to spit and sputter, it means you’re running out of water and the coffee is done. Remove it from the heat and enjoy.

Is Moka Pot Coffee as Strong as Espresso?

What is French Press Coffee?

French press coffee involves suspending coarsely ground coffee in hot water and letting it steep for 4-5 minutes to achieve extraction. After brewing, a fine wire mesh filter at the end of a plunger is pressed into the brewing vessel to push the grounds to the bottom and separate them from the coffee.

The French are hardly novices in the world of coffee, and you might think the French press is the linchpin of French coffee culture. However, the origins of this popular brewing method are contested. It is first referenced in a book in 1852. This, combined with the tale of a Frenchman accidentally brewing his coffee this way and the method catching on, fuel the French form of the origin story.

However, the first official patent came in 1928, and it was for Italian presses. We know that there were presses being used before that, but whether they were French or Italian and whether they “count” is a point of debate among coffee historians and hipsters to this day.

Either way, French presses are relatively easy to use. Simply measure out your coffee beans, grind them coarsely, add hot water and let them steep, press, and then voila—pour out your coffee.

So which pot is “better,” moka pot or French press? While this is largely a matter of taste, there’s nothing like a fun flavorful debate, so let’s compare the two.

A Moka pot uses pressure, whereas a French press uses steeping. Either way, you should be able to brew a pot of coffee relatively quickly, in about five minutes, although a Moka pot can occasionally take a bit longer to bring things to perfection.

The French press allows for a bit more control over the brewing process as you can play around quite a bit with grind size and steeping time. By contrast, the Moka pot brews on its own schedule and you don’t have much say in the matter. Once you’ve figured out what grind size it likes, you probably won’t want to change it.

The two produce quite different kinds of coffee. The moka pot brews coffee that is strong, sharp, and highly energizing. It mixes great with milk or cream. The French press tends to produce coffee that is more full-bodied and richly textured. It’s more nuanced and less overpowering.

You’ll find plenty of glass and plastic French presses, as well as some stainless steel, but it’s metal all the way for moka pots. They generally come in aluminum or stainless steel.

Moka pots can be much more affordable, especially the smaller versions. This makes sense. The moka pot was initially geared toward family use and remains a cost-effective, family-friendly option. On the other hand, French press is a bit more of a “boutique” option. It’s the kind of coffee maker you buy when you’re really into coffee, rather than just looking for a casual cup in the morning to jolt yourself awake. That’s reflected in the taste and texture as well, as noted above. The sharp taste of Moka pot coffee fits working families who are looking for a quick morning pick-me-up, whereas the more delicate and carefully-measured nature of French press coffee lets you take a more artistic approach to your morning brew.

Beverages often provide a glimpse into the world of the people who drink them, and the same is true with these coffee makers. The difference between Moka pot and French press is that they come from different worlds and have different focuses which reflect their social and coffee-brewing backgrounds. At the end of the day, they’re both still fantastic ways to make coffee.

Why You Should Try the AeroPress Inverted Method

The AeroPress is nifty enough as it is, but this simple inverted method can give your AeroPress coffee an espresso-like edge.