Strong coffee isn’t what you think it is.

At some point, you’ve had the experience of dragging yourself out of bed at an uncivilized hour and heading to the kitchen with one thought on your mind: “Strong coffee.”

But what does strong coffee mean?

What you’re really looking for is a jolt of caffeine, and that isn’t necessarily what defines strong coffee. In fact, when scientists talk about coffee’s “strength,” they aren’t talking about its chemical composition at all. They are talking about its physical properties. In particular, they’re interested in a measure called “total dissolved solids,” which is usually expressed as a percentage.

What are total dissolved solids?

“Total dissolved solids means the amount of substances present in the coffee compared to the water itself that composes it,” explains Giulia Angeloni, a researcher of agricultural, food and forestry systems at the University of Florence in Italy.

In other words, it’s everything in the coffee that isn’t water. It makes coffee taste dense, bold and intense.

When you brew coffee, soluble solids move from the ground coffee beans into the water and stay there, creating coffee. Whatever percentage of the coffee is made of up these dissolved solids is called the “total dissolved solids” percentage.

Which brew method has the most caffeine?

“We have demonstrated the importance of extraction conditions, comparing the different methods with the same coffee,” Angeloni said.

For each brewing method, the researchers used their caffeine concentration findings to calculate an estimate of caffeine per serving. They based these caffeine-per-cup estimates on typical European cup sizes, which tend to be quite a bit smaller than North American sizes. In our graph below which plots caffeine content vs. strength for the various brewing methods, we multiplied the researchers’ caffeine concentration numbers by typical North American cup sizes to come up with our own estimates of caffeine per serving.

The graph shows six of the brewing methods, with caffeine per serving along the X-axis at the bottom, and total dissolved solids (or strength) along the vertical Y-axis. (To keep it simple, we included only the classic espresso-brewing method, rather than all three espresso methods they tested): 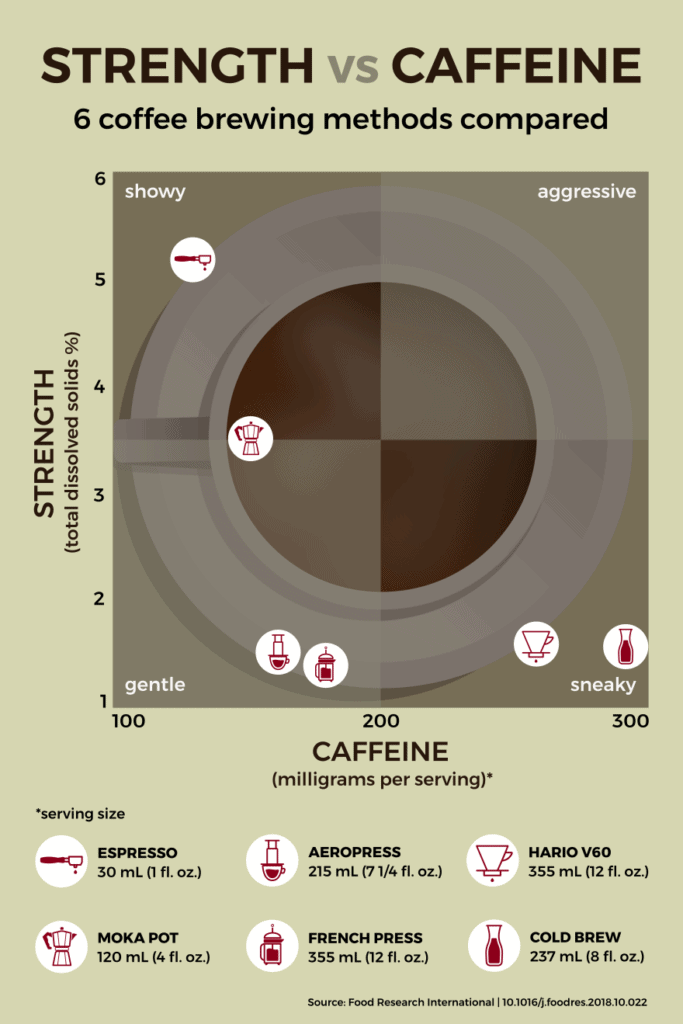 We’ve labelled the four quadrants of the graph as gentle, aggressive, showy and sneaky. Here’s what they mean: 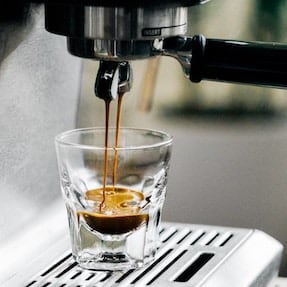 Interestingly, not even espresso made it into the “aggressive” quadrant. Espresso was certainly stronger than the other beverages, but because it is served in small, one-ounce cups, the caffeine in one shot of espresso isn’t enough to carry it into the top right quadrant. Had our graph been based purely on caffeine concentration rather than caffeine per serving, espresso would have been there.

Moka pot coffee occupies a nice middle ground on the strength scale, but again, because it is typically served in relatively small doses, a serving doesn’t carry much caffeine. If you were to double this four-ounce moka pot serving to eight fluid ounces, you’d be verging on the aggressive. 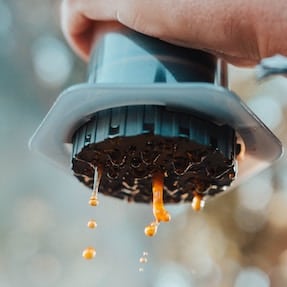 If you brew with AeroPress, you know that there’s a limit to how much it can brew at once. The research team was able to get 7 ¼ ounces out of a single brew, so we went with that as our serving size. That puts AeroPress firmly in gentle territory—not terribly strong, and not much caffeine at that volume. The researchers steeped their AeroPress for one minute. A longer steeping time would likely result in more extraction and nudge it closer to the top right corner. 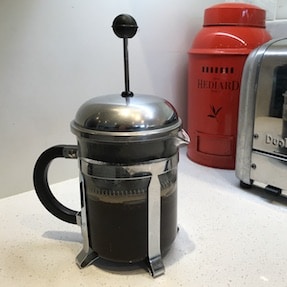 You could argue that French press is the gentlest coffee of the bunch. It has the lowest percentage of total dissolved solids, and while it’s caffeine per cup is slightly higher than that of AeroPress, it’s important to note that this is a considerably bigger cup. The coffee was also steeped for five minutes, which is a generous steeping time. If you were to serve this French press in the same size cup as the AeroPress, it’s caffeine content would be significantly lower. 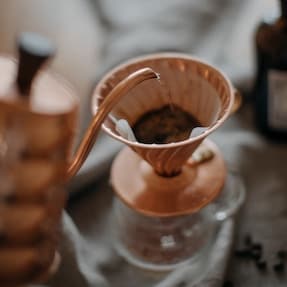 Hario V60 is typically served in the same size cup as French press (in our calculation, a standard 12-ounce cup), yet it yields quite a bit more caffeine. For this experiment, the ground beans were soaked and allowed to bloom, then saturated with a slow, three-minute pour. The result is a coffee that doesn’t taste particularly strong, but does contain a good dose of caffeine. 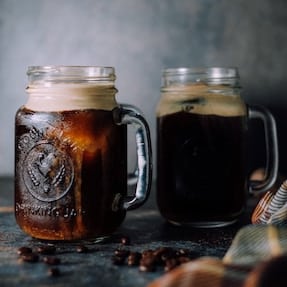 The cold brew method typically produces a highly concentrated coffee that is often diluted with water before drinking. In this case, the brew was relatively low in total dissolved solids, and that may be due to an unusually short brew time. The research team brewed theirs for five hours, which is much shorter than most aficionados recommend—an overnight brew, or 12-14 hours, is common. Nonetheless, in just five hours the scientists were able to extract a great deal of caffeine, making cold brew the “sneakiest” brewing method on the list. The serving size here is eight ounces, which allows for dilution with four ounces of water to produce a 12-ounce cup.

How they brewed the coffee

The researchers used the same commercial brand of mineral water and the same coffee—pure Arabica beans from Gera Estate in Ethiopia—for each brewing method. Because the brewing methods were so different, there were variations in grind size, coffee-to-water ratio, brewing temperature, and of course, the equipment used.

Generally, they used a finer grind for espresso and moka pot, and a coarser grind for the filter methods.

Other chemical compounds of note

The researchers also measured the concentration of chlorogenic acids resulting from each brewing method.

“Chlorogenic acids are the major source of polyphenols in coffee and they are one of the major strong antioxidant compounds in coffee,” said Angeloni. “They can neutralize free radicals, reducing their harmful impact on the body and substantially slowing down their destructive processes. In addition, chlorogenic acids attend directly in some important metabolic processes of the human body.”

How much coffee is safe to drink?

It would be nice to have a nice, clean answer about how much coffee you can drink without going beyond recommended levels of caffeine consumption. However, as we’ve seen, this depends largely on the size of cups.

A safe daily dose of caffeine is considered to be 400 milligrams, according to the U.S. Food and Drug Administration. According to this study, two 12-ounce French press coffees will keep you safely within the limit, but two 12-ounce pour-over coffees will put you over. If you dilute your 8-ounce cold brew with water to produce a 12-ounce cup, you’ll be OK. But if you fill the entire 12-ounce cup with cold brew concentrate, you’ll be over.

And this is all using pure Arabica coffee, which contains less caffeine than its cousin Robusta. The calculations would certainly be different in an experiment using Robusta beans.

So you can use the numbers in this study as a rough guide, but pay attention to your serving size and recognize that if your brewing process is different, your caffeine numbers may be different, too.