When the purchase of a coffee maker comes down to AeroPress vs. French press, you’ll find passionate advocates on both sides of the debate.

The two methods seem to have a lot in common—the use of a plunger being the most obvious. But when you dive a little deeper, important distinctions become clear.

The main difference between AeroPress and French press is the AeroPress’s paper filter, which reduces the oils and sediment in your coffee to a much greater degree than the French press’s metal filter does. The result is a lighter-bodied cup of coffee that’s usually free of sediment.

Both are immersion brewers, meaning extraction happens by immersing coffee grounds in hot water and then separating them, but the AeroPress method extracts under pressure and filters the grounds with a paper filter, while the French press method uses no pressure and a metal mesh filter.

If you’re trying to decide between the two, the most important difference for you may be their capacity. AeroPress brews only one cup at a time, while French press is available in a variety of sizes. If you’re brewing for more than one, AeroPress will require some repetition.

Beyond that, there are substantial differences in brew time, characteristics of the coffee, and ease of cleaning.

The following table covers the main differences, which we’ll get into in more detail below:

AeroPress is the new kid on the block

French press has been around for close to 100 years. It’s a straightforward brewing method that anyone can grasp. Beans are ground coarsely and mixed with near-boiling water in a cylindrical vessel, then left to steep. Before pouring, a plunger featuring a metal mesh filter pushes the grounds to the bottom to separate them from the coffee.

AeroPress was invented only about 15 years ago, by a man named Alan Adler. Adler also invented the Aerobie Pro Flying Ring—that weighted ring you can throw like a Frisbee the entire length of a football field.

Adler’s coffee innovation combines a plastic brewing cylinder with a plunger. It looks like a much wider version of those plastic syringes kids use for water fights in the summer. But the AeroPress has found success for two primary reasons: the quick brew time which can be attributed to pressure, and the filter cap that keeps everything neat and clean.

How an AeroPress works

The main brewing cylinder of the Aeropress is designed to sit directly on top of a mug. The filter sits in a cap screwed onto the bottom. The coffee grounds go in, then the water. Finally, the plunger is inserted in the top.

When the plunger is pushed down, it forces the hot water through the grounds. Coffee emerges from the bottom. This pressurized brewing method means that more coffee can be extracted from the beans in a shorter amount of time than steeping would require. A typical brew takes only 1-2 minutes.

Two brewing methods in one

But that’s not all. The AeroPress can also be turned upside down and used to steep grounds in much the same way a French press does. When you combine this ‘inversion’ method with a metal mesh filter (available as an accessory) the AeroPress becomes a versatile brewer that is quite capable of  approximating French press coffee.

How to make AeroPress coffee

In this video, Gail from Seattle Coffee Gear tries both methods:

Gail didn’t taste the difference because the only difference between her two brews was the inversion, but you can see how the inversion method—because it doesn’t drip—would allow for longer steeping time, with perhaps a coarser grind. There’s room to experiment.

Can an AeroPress make espresso?

The AeroPress brews under pressure, but the pressure is nowhere near what is created by an espresso machine.

Espresso, by definition, must be brewed with about nine bars of pressure. You will never get more than one bar of pressure from an AeroPress.

Nonetheless, we’ve tried to make espresso with AeroPress and actually came up with a recipe that comes close. You won’t get the intensity of a real espresso, but you will get a nice dense coffee.

How to make French press coffee

The French Press is simple to use.

You want to use coarse rather than fine coffee grounds. The mesh filter on a French press has relatively big pores that will allow finer grounds through and create sediment in your coffee.

All you have to do is remove the lid and the plunger, add coffee grounds and hot water, then stir. Place the lid and plunger back on and wait for it to steep. Typical steeping time is 4-5 minutes. Your grind size will dictate which end of this range you should be at. Smaller grind, shorter time. Larger grind, more time. If you need stronger coffee, increase the ratio of beans to water.

When everything has finished steeping, press the plunger down to the bottom with firm and steady pressure. This separates the used grounds from the coffee. Your brew is ready.

French press coffee is known for its full body and slightly oily quality. It thrives with darker roasts, because it’s rich and bold. Part of that full mouthfeel comes from the fine grounds that inevitably make their way into the coffee as sediment, and which will no doubt be visible at the bottom of your cup when you’re done.

AeroPress, with its paper filter, produces a lighter-bodied, sediment-free cup that brings out the bright and fruity flavours of whatever coffee bean you might be using. The coffee is generally smoother and more floral than that produced by French press. If you are more interested in bean flavours than roast flavours, AeroPress does a great job of highlighting them. It’s a great tool for exploring single-origin coffees.

The AeroPress’s paper filter is key. It blocks oils and sediment from getting into the coffee. Those aren’t necessarily bad things, and many people crave the silky, oily quality of French press coffee. If you’re one of those people, you can try a compromise: AeroPress with the metal mesh filter, which allows oils to seep into the cup while still keeping most of the sediment out.

Taste preferences aside, one big advantage AeroPress has over French press is its versatility. We’ve already noted that it can brew in two distinctly different ways, but within each of those methods there are an infinite number of variations you can try.

You can start with the size of your grind. While French press demands a coarse grind, AeroPress with a paper filter allows you to grind beans much finer and see how that plays with the other brewing parameters, such as water ratio. You can experiment and adjust, getting tasty—but different—results each time. The AeroPress is sensitive to minor changes in brew time, grind size and water temperature.

AeroPress has a much shorter brew time than the French press because of the pressure. It’s usually about one minute for AeroPress, four minutes for French press.

But AeroPress is only faster if you’re brewing a single cup of coffee. Which brings us to our next discussion point…

AeroPress is a one-cup brewer, and it’s not a large cup. If you make a concentrated brew, you can dilute it to create a slightly larger cup, but you can’t really brew for two.

That might be all you need to know to swing your decision in favour of French press. With a French press, you can buy a two-, four-, six- or eight-cup carafe and brew for a dinner party. If that’s what you need, then French press is the way to go.

The small volume of the AeroPress renders its fast brew time useless if you are brewing for several people, because you have to clean it out and repeat the process each time.

Ease of cleaning is another big selling point of the AeroPress. Because the coffee grounds end up in the cap, compressed into a compact puck, you can simply unscrew the cap and be rid of them in seconds, then just give the rest of the device a rinse.

This is in contrast to the French press, which leaves you with coffee grounds compressed tightly into the bottom of a glass cylinder. If you want to compost them, you have to dig them out before you begin cleaning the vessel, which is a nuisance. (If you’re OK with sending the grounds down the garbage disposal in your sink, you can just run a strong stream of water into the carafe to loosen the grounds, then dump everything.)

Coffee grounds tend to get stuck in the mesh filter of the French press, or in the bits of hardware that hold the plunger together. To really clean it well, some disassembly may be required. I usually rinse and wipe it day-to-day, then give it a proper disassembly and cleaning once a week.

AeroPress gets the nod for both durability and portability, because it is small, light and plastic. It’s a great way to make coffee while camping, because it won’t add much weight to your pack.

Anyone who has used a glass French press long enough knows that they break, so they aren’t ideal for travelling. Some French presses, including the Espro which I’ll discuss in a moment, are made from stainless steel and are therefore both durable and portable.

Is the Espro 32 oz French press the best of both worlds?

If you’re inclined at this point to run from the murky sediment and fragile glass carafe of the French press, there’s something you should know.

Two coffee-loving engineers in Vancouver have fixed all the flaws of a typical French press in creating the Espro. 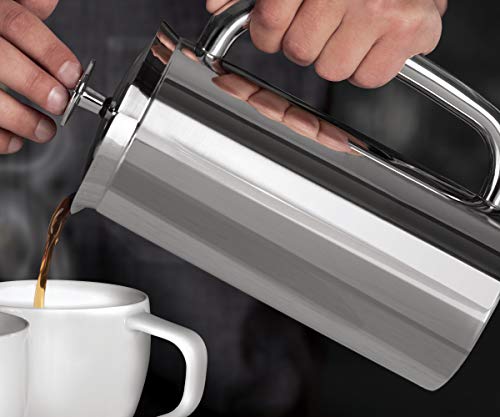 The Espro P7 French press is a double-walled, stainless steel French press with an innovative filter that keeps all the grounds and fines out of your cup, but allows the oils in. The Espro’s unique filter has two layers, each shaped like a basket, and they are made of microfilters that are 9 to 12 times finer than the filter on a typical French press.

The double-walled brewing vessel also keeps the coffee nice and hot, overcoming another criticism of French press which is that the water often dips below optimal extraction temperature before steeping is even complete. No such issue with the Espro, and of course, your coffee stays hot on the table for a lot longer, too.

Take a look at the Espro French press in action:

So here you have a French press that is durable and keeps your coffee hot, giving you all those flavourful coffee oils without any of the sediment. It costs two or three times as much as a typical French press—and way more than an AeroPress—but it’s a very effective and stylish device that’s worth considering if French press is your first love.

Of course, you don’t need to spend a lot of money to have great coffee. If cost is a major consideration in your AeroPress vs. French press debate, rest assured that the low-cost AeroPress provides some of the best value of any device on the market.