Espresso. Nespresso. The two words may be separated by only a single letter, but there is a world of difference between the two.

Espresso machines are well-known. There is a good chance you are served by one every day when you get your coffee on the way to work. Many people have them in their homes. You might even be considering one to save yourself the daily trip to Starbucks.

But what about Nespresso? What is it, and what benefits might it have over a traditional espresso machine?

Is Nespresso the same as espresso?

Nespresso machines brew espresso. Originally, this was all they did. But the newer line of models (known as Vertuoline) can also brew a regular cup of coffee.

Nespresso’s convenient system virtually eliminates human error from the espresso-making process. It has convinced many coffee lovers to pivot from their old espresso machines to a Nespresso machine.

As you can see, the coffee capsule market is growing quickly:

Nespresso is by no means the only player, but after getting their start in Europe they are really making inroads in the U.S. market.

Nestlé reported in its half-year results for 2020 that despite the COVID-19 pandemic, Nespresso had seen double-digit growth in North America. Sales in Europe decreased—particularly in boutique stories, for obvious reasons—but e-commerce sales grew by 48.9 per cent. That was enough for Nestlé to announce in July that it was expanding its production center in Switzerland.

How does Nespresso differ from espresso?

How do Nespresso machines work?

To use a Nespresso machine, you insert a capsule into the machine. They come in standard, decaffeinated and flavored varieties.

The machine pumps water from a reservoir and heats it with a boiler in just a few seconds. It heats only enough for a single serving at a time.

The machine punctures holes in the capsule and then injects the hot water through the capsule at high pressure. The water’s interaction with the fine coffee grounds extracts flavor compounds. These are dissolved into the water and forced out the other end of the capsule as coffee.

A special valve ensures safety in the event that the pressure becomes dangerously excessive during the brewing process.

Forcing water through the coffee grounds at high pressure is what gives Nespresso coffee its real espresso flavor. Scientifically, it is exactly the same process as that used by conventional espresso machines.

How do espresso machines work?

Espresso machines extract coffee the same way—by forcing hot water through finely ground coffee at pressure—but they rely a lot more on you to make it happen.

First you have to grind the coffee to just the right size. Then you have to place it in a filter basket and “tamp” it, which means compressing the grounds just the right amount so that the water doesn’t flow through too quickly or too slowly.

Espresso machines vary in how much of this workload they place on you.

The Nespresso brand is a part of the Nestlé Group corporation based out of Switzerland. The brand name combines the company’s name, Nestlé, and espresso.

All the coffee used for their coffee capsules is processed in one of three factories in Switzerland. Their patented Nespresso coffee machines are sold worldwide.

Nespresso got its start from an idea that a Nestlé employee had back in 1975.

His name was Éric Favre, and he was in Italy when he noticed a coffee shop that seemed to be way more popular than the other coffee shops in the area.

He investigated and found that there was one major difference between this coffee shop and the others around it. They all used the same equipment, but the popular coffee shop did something unique. They pumped their espresso-machine levers several times instead of just giving them one long pull. This forced both air and water into the coffee.

This injection of air, known as aeration, draws flavor out of the coffee beans and it produces a better crema—that creamy foam that sits on the surface of an espresso.

After noticing this, Favre drew up the first plans for a prototype of the Nespresso machine. Since 1986, his machines have been producing flavorful coffee around the world using this science.

Thirty-four years later, the company has more than 13,000 employees.

Nespresso introduced the Vertuo line system in 2014 to give some of its machines the ability to brew a regular, full-size cup of coffee instead of just a tiny espresso. With machines like the Vertuo Next below, you just select a larger capsule if you want to brew a regular cup. 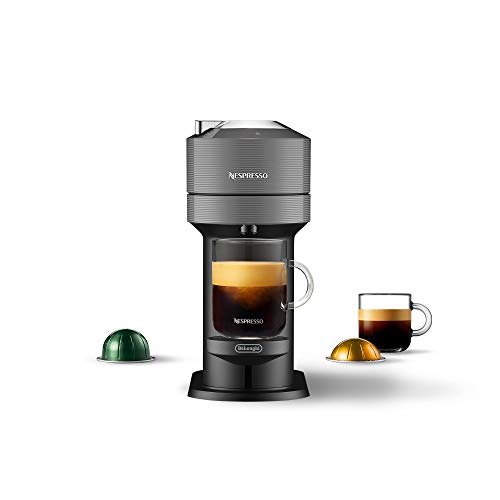 With a regular espresso machine, you need to understand grind size, tamping, water temperature, extraction time, and all the ways those variables interact to produce espresso. So espresso machines do require more work, but they also give you a lot of control over the result.

Nespresso machines don’t give you this flexibility or allow for much customization, but they are more consistent—especially for the unskilled barista.

What are the advantages of a Nespresso machine?

Cost: Nespresso offers a number of different machines for consumers to choose from. They are generally less expensive than regular espresso machines. Most fall into the $150-$300 price range.

Ease of use: Nespresso machines are very easy for beginners to use effectively. They use only pods, so you don’t have to worry about grinding coffee or purchasing a coffee grinder. They allow some customization, but are easily reset to factory settings with a few clicks of a button.

Speed: It is much quicker to pop a coffee capsule into a Nespresso machine, press a button and wait 30 seconds for your coffee than it is to prepare a high-quality espresso using a regular espresso machine.

What are the drawbacks of a Nespresso machine?

Flavor: We’re not saying Nespresso coffee is bad. Not at all. It’s actually very good and tastes like real espresso. But you will not reach the same heights of flavor with a Nespresso machine that you can reach with a traditional espresso machine. (And you certainly won’t get the lows!)

A perfectly pulled shot of espresso from a manual lever machine will beat a Nespresso every time.

Lack of customization: Nespresso’s greatest strength—consistency—is also one of its drawbacks. You can’t tweak. You can’t improve. The coffee is good, but it is what it is.

Never will you reap the rewards of changing a little variable in your brewing process to produce better coffee. That’s one of the joys of real espresso.

Ongoing expense: While Nespresso machines are generally less expensive than espresso machines, they do require you to replenish your supply of capsules at a cost of about 60 cents per cup. You’ll spend less money up front, but this ongoing expense means that if you frequently drink coffee, you’ll end up spending more than you would on whole coffee beans for your espresso machine. It adds up.

Should you get an espresso machine or Nespresso?

If you want the most affordable thing to get you going, something that will be easy and quick to use, then Nespresso is worth the money.

If you want to spend a little more time perfecting your barista skills and a little more money to buy a high-quality machine, you might be better off purchasing an espresso machine instead.

Start by determining how important it is for you to have the control to customize your coffee’s flavor, and go from there.

Where Do Coffee Beans Come From?

If you've ever wondered where coffee comes from, read on to learn its history, geography, biology and economics.