For many people, coffee is a way of life. Many of us can’t function without a cup (or two) in the morning, and once that caffeine hits, we’re ready to face the day.

But what if you want the flavor and aroma of coffee without the acidity, jitters or crash? Chicory coffee is one alternative to coffee that offers many of the same benefits.

If you’re ready to make a change, now may be the time to see what chicory coffee can do for you. Here is the ultimate guide to both the product itself, and the brands that make the best.

What is chicory coffee?

Chicory is a type of flowering plant. Chicory coffee is made by roasting the root. The rest of the plant is discarded or used as animal feed, depending on how it’s processed.

Unlike coffee beans, which are made from the fruit of the coffee plant, chicory root is earthy and sweet. The roasting process unlocks the natural sugar inside the root, making the taste of chicory coffee smoother and less acidic than actual coffee.

Compared to coffee, roasters can yield between 45 and 65 per cent of the root for the beverage, which is more than double what you can get from regular coffee beans.

If you’re on the fence about switching to this coffee substitute, perhaps understanding its benefits can help sway your opinion. Here’s what you can expect from drinking chicory coffee.

Regular black coffee has zero calories, but it does contain various antioxidants and nutrients that help your body. Chicory roots contain about 23 calories per 100 grams, and they also have carbohydrates and other vitamins. Some studies have shown the health benefits of chicory root, such as helping the body produce bile, as well as lower blood cholesterol levels.

Makes you relaxed and mellow

While coffee acts as a stimulant, chicory coffee helps you calm down and relax. So, a cup of this beverage before bed can make it easier to drift off to sleep. That said, chicory coffee doesn’t put you to sleep, so feel free to drink it during the day as well.

Chicory root contains a lot of inulin, which is a type of dietary fiber. Once brewed, you can ingest this fiber, which is part of the reason for the root’s ability to help lower cholesterol. Other benefits include weight loss and gastrointestinal health. Since inulin is a pre-biotic, it stimulates the bacteria in your gut to work more efficiently. Another side effect can be regulating blood sugar levels. 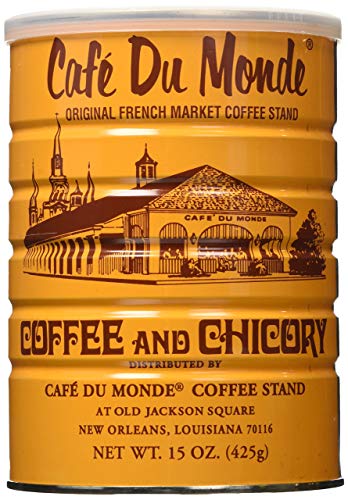 This product comes from the world-famous Cafe Du Monde in New Orleans. As you can see on the can, there is a mix of chicory root and coffee, which is just how they serve it at the cafe, although they add milk and sugar. Of course, if you want the full Cafe Du Monde experience, you need to drink your coffee with a side of beignets.

Each can has about 15 ounces of coffee inside, so there is some caffeine to help you power through the day. According to some, regular coffee can be too much for their system, but a cup of Cafe Du Monde is perfect. You get a slight energy boost without too many jitters, nor do you get the crash afterward. 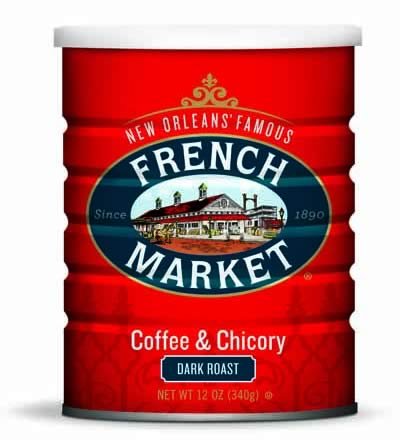 Staying in New Orleans, this blend has been in the city for over 100 years, since 1890. While not quite as famous as Cafe Du Monde, French Market chicory coffee is just as robust and flavorful. The French Market blend goes a little heavier on the coffee beans than Cafe Du Monde, making it an ideal option for coffee lovers.

You can choose between a medium or a dark roast blend, and you can buy regular or decaf versions. Keep in mind that decaf doesn’t mean caffeine-free. Instead, there is much less caffeine than you would get from a standard cup of coffee. The beans used in this blend are 100 per cent Arabica, giving the beverage a smoother, bolder taste. 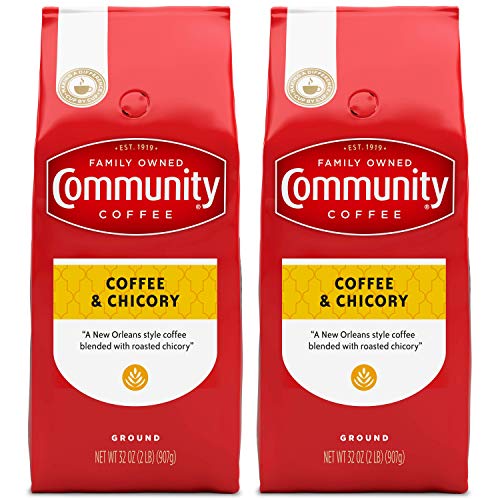 Although the Community Coffee brand isn’t as old as French Market or Cafe Du Monde (it was established in 1919), it still rocks the traditional chicory coffee mixture with style and grace. As with the other brands, Community takes great pride in roasting its coffee beans and chicory root to perfection. With 100 per cent Arabica beans and high-quality chicory in the mix, you can taste the dedication and attention to detail.

Another thing to point out with Community Coffee is that the beans are ethically sourced and fair trade. Coffee lovers know that fair trade brands are better to buy because they help farmers make more from their crops. The company’s name isn’t a misnomer—it gives back to the community, donating a portion of every product sold. 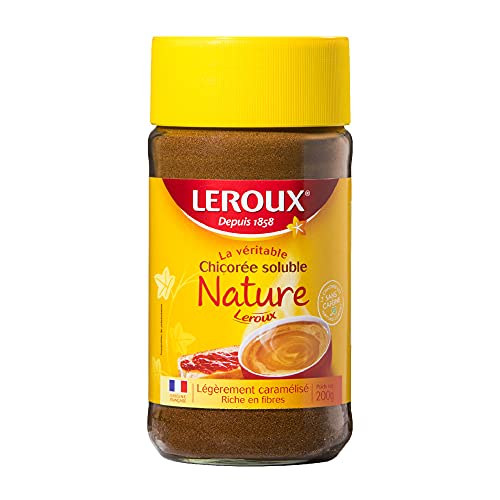 When you’re in a rush, you may not have time to bust out the French press to make a cup of coffee. Fortunately, instant coffee is fast and efficient, even if the flavor profile is not as bold or full-bodied. Leroux offers the same convenience with soluble chicory root granules. Leroux is a French company, so its products are imported, making this coffee more expensive than other varieties.

Overall, the flavor of Leroux is relatively mild, although you can detect bitter notes. One of the benefits of instant coffee is that you can simply add or reduce the granules if you want a stronger or lighter beverage.

Leroux also sells chicory cocoa powder, which tastes much smoother and sweeter. Since chicory already has earthy flavors, mixing it with hot cocoa delivers a better drinking experience. We highly recommend both options, particularly because chicory coffee doesn’t have that much caffeine anyway. 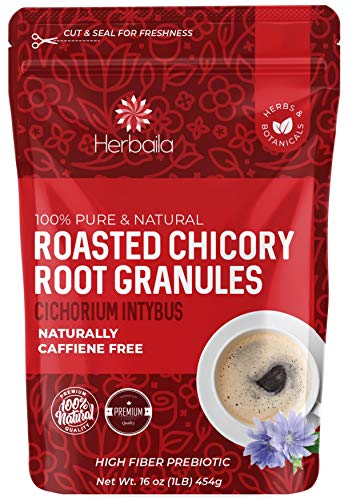 Once you develop a taste for chicory root, you may prefer to drink it straight, not with coffee or cocoa. Herbaila uses high-quality root granules, which are naturally gluten- and caffeine-free. As we’ll get into later, chicory root has some potent health benefits, so drinking it straight can help your body work more efficiently.

Another reason you can feel good about Herbaila products is that they adhere to Good Manufacturing Practices (cGMP) as enforced by the FDA. The company sources its chicory root from India and says its selection process is rigorous and thorough. Herbaila takes great pride in choosing the finest chicory roots, much like how high-end coffee roasters choose the best beans. 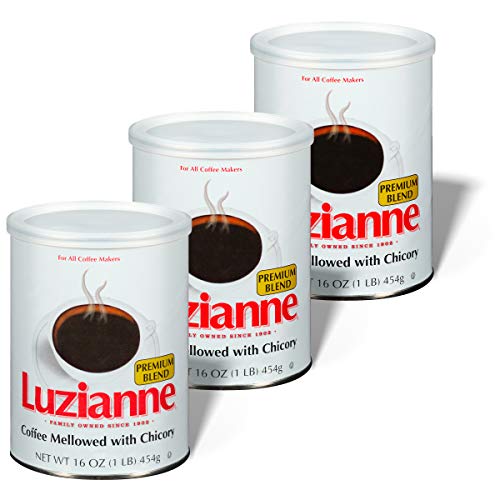 Our final product is another blend of chicory root and coffee beans. However, according to Luzianne, they roast the beans first, then “finish” them with a touch of chicory root. So, if you’re a coffee lover who’s trying to switch, you might want to start here to wean yourself off slowly. The chicory flavor is subtle but present enough that you can taste it. Over time, your palate will acclimate to the root’s earthy and slightly bitter notes. From there, you can move onto Cafe Du Monde or French Market blends.

Luzianne makes both chicory coffee grounds and an instant coffee version. You can also buy both dark and medium roasts, depending on your preferences.

A brief history of chicory coffee

Chicory root dates back to ancient Egypt, where doctors believed that the root helped with liver function and digestion. However, because the plant is so bitter when it’s not roasted, its health benefits were not too widespread.

Once someone discovered how much better chicory root tastes after roasting, chicory coffee was born. This happened around the 17th century, and chicory coffees were highly popular, particularly in France.

The practice of drinking chicory coffee emigrated to the U.S., where it became most popular in Louisiana, thanks mainly to its sizeable French population. To this day, chicory coffee is much more prevalent in Louisiana and New Orleans than in other parts of the country. Oddly enough, this practice really took off during the Civil War. Rationing and a lack of coffee beans forced residents to seek alternatives, and since chicory was already well known, it became a go-to replacement.

Typically, French-style chicory coffee blends the root with regular coffee beans for a smoother flavor that still contains some caffeine. The flavor mixture of both ingredients can be a little off-putting for newbies, but adding milk and sugar can help cut down on the bitterness.

As we’ve seen, there are a few ways to drink chicory coffee. The most common varieties include:

If you want 100-per-cent pure chicory root, you should buy soluble granules. Since these pieces are slightly larger than regular coffee grounds, you may want to use a filter. Otherwise, you’ll have to let them steep for a little while so that they dissolve completely.

One of the easiest ways to make chicory coffee is with ground-up roots. The preparation is pretty much the same as regular coffee, meaning that you can put the mixture into a drip coffee maker or French press.

If you want extra caffeine in your beverage, the best option is to buy a chicory/coffee mix. As we’ve seen, most brands will mix the two ingredients for a smoother result.

If you’re new to chicory coffee, keep in mind that the flavor balance and profile can take a while to get used to. That said, once you develop a taste, you’ll want to incorporate chicory into your regular routine. As we mentioned, many people add roasted chicory root to a regular cup of coffee, or you can get pre-blended grounds and start from scratch.

With so many brands to choose from, you have plenty of options to find the best flavor for your taste buds.

11 Of The Best Coffee Scenes From Movies

We encourage coffee scenes in movies whenever they can be squeezed into the script. Here, movie podcaster Jordan Bowman rounds up his 11 favorites.