There are plenty of big names among coffee makers, but among American mass-produced models, one name stands alone: Bunn. For more than a century and a half, Bunn has stood as an icon of fast and easy American coffee, and they have continued to make quick-brew coffee makers to this day.

So what’s the story behind one of America’s most enduringly popular coffee makers? We’ll tell you, and we’ll also point out what to look for when shopping for one of their units.

But first, our pick for the best Bunn coffee maker on the market today:

A brief history of Bunn

Bunn has been a name in the American coffee industry since way back in the 1840s, when Jacob Bunn started a grocery store in Springfield, Ill. A young Abraham Lincoln was an early customer of Bunn’s store. As the decades passed, the Bunn family’s business continued to grow and expand until, by the 1950s, it had become one of the most prominent coffee maker and beverage dispenser companies in America, earning global standing.

Bunn flourished in the booming post-war U.S. economy,. George Bunn, a descendent of Jacob, found a way to use paper filters with their coffee makers, and the rest is history. One of the first major models invented by the company, the Model X, was invented in 1963 and featured filter paper and a slot to manually add hot water.

This led to the establishment of the Bunn-O-Matic company, and with it, a slew of further innovations. For example, 1972 saw the advent of the first drip coffee maker with a built-in hot water boiler for household and commercial use. That legacy of innovation continued into the 21st century, with 2005 seeing Bunn release its first models for tea bag boiling as well as coffee capsules.

Bunn has become one of the biggest coffee maker distributors in the world, pairing with McDonald’s and KFC in the mid-2000s while Bunn-O-Matic joined HOFEX—a food, beverage, and hospitality services trade show—in Hong Kong in 2011.

For well over a century and a half, Bunn has been a force in the coffee making world, and as these coffee makers demonstrate, they are set to remain that way for the foreseeable future.

Prices pulled from the Amazon Product Advertising API on: 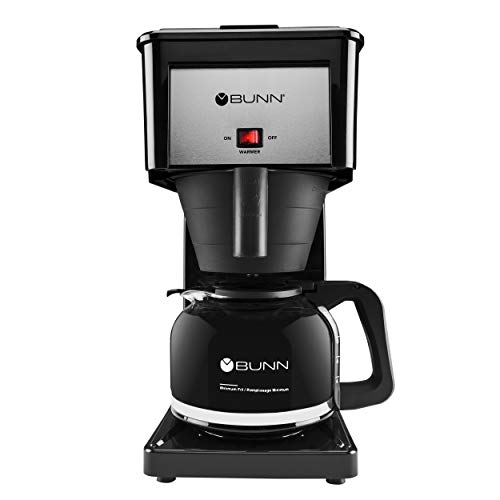 One of the most important things to consider when choosing a home coffee brewer is how fast it operates. Let’s be honest, while we love coffee and you may like to think of yourself as a coffee connoisseur, there are even more of us who drink it to jolt ourselves out of early morning grogginess. Taste is obviously paramount, but you don’t want to wait around when you’re sleepy in the morning to experience that taste, nor do you want to do so when you’re in a hurry to have a quick cup before dashing off to work.

That’s why one of the biggest selling points of the three Velocity models from Bunn—and the Bunn GRB Velocity Brew in particular—is the fact that they can brew coffee incredibly quickly. This model can brew a pot in as little as three minutes, which should be fast enough for even those slowest to wake up in the morning.

If you aren’t a morning person, the fast brewing speed of this model can be a lifesaver.

If you are a morning person, first, lucky you, and second, this percolating model can help perk you up all the faster before you zip off to work.

This brewer has some capacity, too. It can brew between four and 10 cups. While you may have to wait a tad longer for the 10, even that brews pretty quickly, meaning you can avoid early-morning arguments over who gets coffee first because with the Velocity GRB, there’s enough coffee for all.

The Velocity GRB comes with a variety of nice features, most notably a drip-carafe with a lid and spout that makes it easy to pour and reduces spillage. It also features a flat-bottomed filter and funnel.

Finally, this model is quite durable, so you don’t need to worry about replacing it any time soon.

One quibble we’ve seen about the Velocity GRB is that on some units, the carafe doesn’t fit as snugly on the hot plate as it should. This doesn’t seem to be a problem on most models, so perhaps it was a temporary manufacturing glitch that has since been rectified.

Still, that’s a small issue that doesn’t seem to impact the unit’s operation or the coffee’s taste, so if you like your coffee jet black and brewed at jet speed, this model may be a great choice. 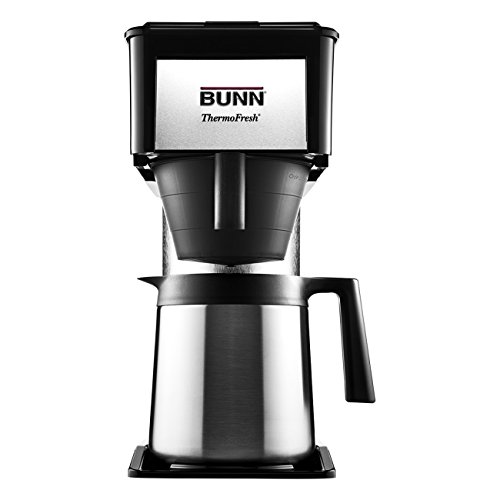 Here we have another coffee maker that excels in brewing a lot of coffee in a quick and timely manner. The Bunn BT Velocity Brew also brews up to 10 cups, and can likewise do so in about three minutes. This is one of the fastest Bunn brewers on this list. Even better, it has the endurance to match that speed. Even the fastest runners or race cars slow down over time, but the BT Velocity does not.

The BT is able to provide that quick coffee without sacrificing an inch or drop in the way of quality. Its spray head works to extract flavor from the coffee grounds evenly as it pours out, resulting in a consistent flavor that’s as good months and years into service as it was the first day you plugged it in.

The BT Velocity’s signature feature is its good thermal carafe, which keeps your coffee hotter longer. It will keep coffee hot for about two hours after you brew it, so if you’re busy racing around the house getting things done but don’t want to worry about your coffee getting cold, this is a good option.

All these great features come at the cost of some counter space, because at 7.5″ x 13″ x 15″, the BT Velocity is taller and bulkier than most other models on this list. In the balance of form versus function, this model definitely skews more toward the latter. To be honest, it doesn’t look that elegant.

Still, as every fairytale will tell you, “It’s what’s inside that counts,” and that’s certainly true when it comes to coffee makers. With its great speed and ability to keep coffee hotter for longer, this model can make your morning coffee feel like a magical potion to wake you from your doldrums. 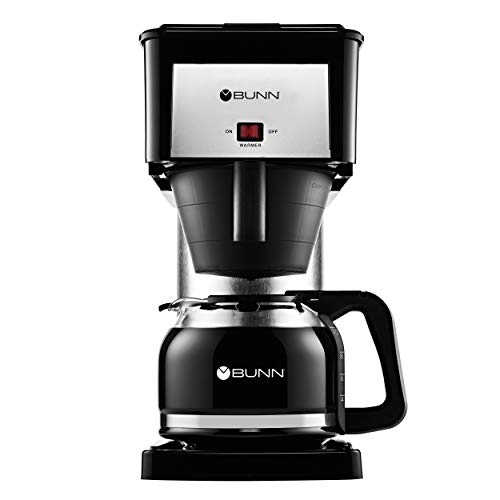 Finally, we come to the fourth and final Velocity variant on our list, another model that makes the 10-cups-in-3-minutes boast.

The Bunn BX-D Velocity Brew sets itself apart by being incredibly sturdy. If the GRB is jet fast, the BX-D is aircraft-carrier strong and built to last. With its incredibly sturdy stainless steel and plastic frame, of all the models on this list, this one has the least chance of being cracked or otherwise physically damaged.

What’s more, this model is specially designed to brew coffee at higher altitudes, which can be challenging because the lower pressures at elevation lower the boiling point of water. If you live in a place like Denver and are looking for a coffee maker that can give you a “Rocky Mountain High” brew-wise without suffering altitude issues, this is the model for you.

This model can have problems dealing with finer coffee grounds. Fine coffee grounds provide more resistance to water, and the force and speed of water flow in this model mean it could be susceptible to overflow if the grounds are too fine. Of course, you don’t want to grind too fine anyway, because those tiny grounds can easily become over-extracted and bitter. Stick to medium.

As long as you can keep this in check, this coffee maker is the peak of high altitude coffee makers. 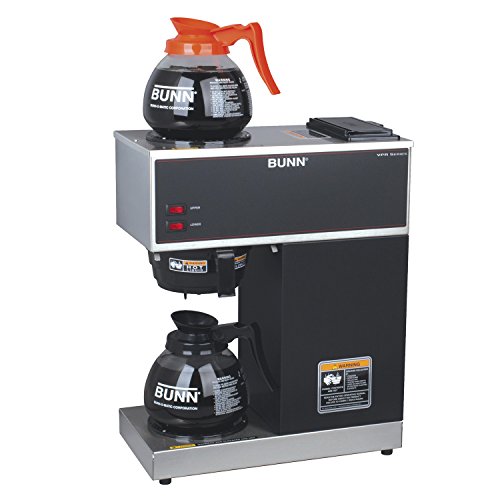 The Bunn VPR-2GD is not a model for the faint of heart. It’s commercially and industrially sized, and it doesn’t hide that fact at all. It’s an absolute behemoth, too, so you’d better have a clear work counter or similar space to house it.

If you can handle all of that, however, you’ll be rewarded with the most powerful coffee machine on this list. Not only can it brew up 12 cups of coffee fast, but it also comes with decanters, warmers, and a variety of settings to allow you to tinker with the coffee making process. You can exert more control over the brew you produce with this model than any other on this list. It also boasts a double warmer setup, which means the coffee will stay hot for a very long time.

That said, it also takes a long time to brew—as much as 15 minutes. That may not seem like too much time, but to someone on a short break or a groggy non-morning person desperate for their coffee, that can seem like an eternity—especially when compared with the three minutes promised by the Velocity models.

Still, this model is incredibly sturdy. It is the powerhouse of this list. 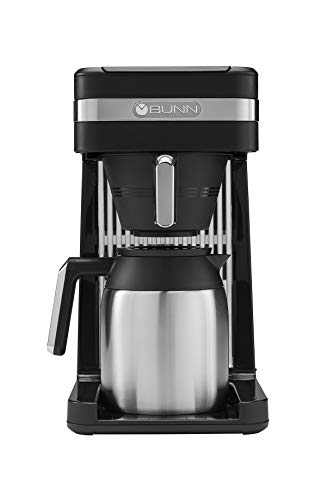 The Bunn CSB3T Speed Brew is much more streamlined than its competitors on this list, but it’s worth a quick mention.

It can brew a full 50-ounce pot fairly quickly and does so with the benefit of a thermal carafe that helps keep the coffee warm for more than two hours. The stainless steel is highly durable as well, and it also features a good spray head for coffee extraction.

It’s a bit pricey for such a simple model, but it’s still a good, long-lasting coffee maker.

What to look for in a Bunn coffee maker

Here’s a quick rundown of things to consider when shopping for one of these models:

Speed of brewing: The Velocity models are clearly head and shoulders above the rest at a super fast three minutes.

Build quality: Those made with stainless steel tend to fare far better and last longer than their mostly plastic counterparts.

Capacity: Most here can brew 10 cups, while the commercial-grade Pourover can brew 12, but takes far longer to do so.

Ease of use: All Bunns are designed to be easy to operate, but consider the number of parts and how much disassembly you’ll need to do for cleaning.

There is no denying that the Velocity models with their 10-cups-in-three-minutes speed are the best overall units. Each of them has pros and cons as described above, but it’s the Bunn GRB Velocity Brew that we choose as the overall winner because of its all-around performance.

That said, if you’re shopping for a company break room and don’t mind the slower brewing speed, you might want to give the industrial-strength Pourover commercial option a second look.

Still, no matter which option you choose, one thing is for sure: Bunn coffee makers are here to stay.